Over the last week or so, a lot of scenic work has been completed on the new HO scale Illinook switching and industrial module. Here are some photos of progress so far… 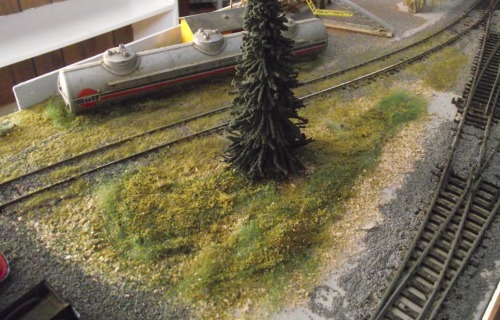 Above: Scenery between the tracks

On the old Illinook modules, there was an embankment with a brick retaining wall and some abandoned buildings on top of the embankmant. For a while I wasnt sure what to do with those buildings but I didnt want to leave them off the new Illinook either as they were signature features of the old Illinook. Then I realised that I could fit them between the tracks on the east end of the module, and so thats where they were placed.

Above: Abandoned buildings on new Illinook Overall, progress has been good, but there is now a bit of a timetable to get as much done in the next few weeks as possible before we move!