The plan below shows the original track plan of the Dolton Industry Park module. The track section that looks like a standard crossover is actually a single slip. The only addition to this track plan through it’s lifetime was the adding an extra set of turnouts to the middle two spurs on the right hand side so the locomotive could run around cars.

Operating the Dolton Industry Park layout was more or less like a switching puzzle. 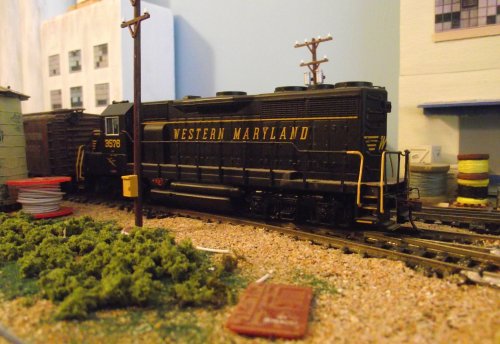 Until September 2011, a train was staged on the longest spur, with the locomotive facing east. After September 2011 a small staging module was built which allowed a train to be staged west of the Dolton Industry park so an operating session could start with a train in the staging are or ready to depart from the park. Dolton Industry Park Transport (DIRT) trains do not require a caboose, but any other railroad that runs a train to the park may require a caboose depending on their operating rules. There was normally also an extra loco available to facilitate switching, which was in the Flour Mill spur or the Flour Mill spur lead, or anywhere where there was available space for it.

Switching is what its all about

Switching, to me, is the most interesting part of model railroad operations. All the layouts I have built since 2004 have been designed for switching and Dolton Industry Park is no exception. If I am given a choice on a layout of running a mainline train or a local with lots of switching, I will invariably choose the local over the mainline train.

From start to finish, an operating session on the Dolton Industry Park was switching, switching and more switching. Basically, cars at industries were collected and put in an outgoing train, and cars in an incoming train are switched out to the various industry spots.
While it was usual to have one train on the layout at a time, I tried having two trains (albeit 1 x 4 cars, and 1 x 3 cars long) on the layout at the same time with some success. It got pretty crowded and pretty intense with two trains but it could also be lots of fun trying to work out how to get cars into and out of two trains with even less available space to move cars around! 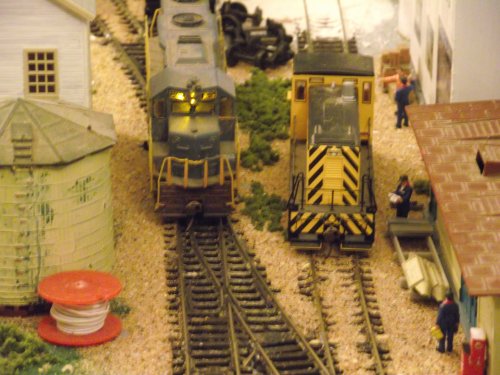 Some years ago I found a Yahoo Group that did virtual interchanging of cars between members layout. The C&SFT layout hosted a lot of virtually interchanged traffic and when I was deciding on a track plan and modus operandi for the Dolton Industry Park I wanted the layout to work well with the virtual interchange idea. The location chosen, track plan, and industries mix were all influenced to quite a large degree by the virtual interchange idea. A large proportion (often as high as 75%, sometimes 100%) of the traffic to and from the park in an operating session was virtually interchanged car movements through the Virtual Interchange Group I am a member of. The application I use to manage traffic on the layout is called the MRICF.

When being operated without an extra staging module, once all the cars that need to be moved have been, and the outgoing train was made up with the trains loco on the western end of the train, the session would end. The actual moving of the train into or out of the industry park was not modelled when the layout was the only layout I had. But when there was a staging module or other modules connected the inbound and outbound trains were moved as part of the operating session.

There were no signals on DIRT trackage, and a Restrict Speed Rule 80 applied from the divergence point with the IHB. There was normally anywhere from one to three locos on the layout at a time, with two locos being the most common number. As the layout was such a confined space and was designed for single person operation it was rare for there to be two locos actually moving at the same time, but there have been a few instances where there have been multiple operators using the layout.

The railroad was representative of the area east of Dolton Junction, around Cottage Grove Ave, and would be accessible from the IHB mainline. Below is a map of the environs.