Hello Stawell, and thanks for the memories

On a cold weekend in July every year, one of the best model railway exhitibions in Australia takes place at Stawell, Victoria. Organised by the Grampians Model Railroaders, it is fortunate to have an excellent venue, and always has a great variety of layouts and some trade stands for purchasing railway related items.

We also spent a number of years living in Stawell and so we have a number of friends in the Stawell region.

This year there were a number of layouts that reminded me of times past. When I was but a teenager I remember travelling through Fish Creek in southern Victoria while travelling on the way to Wilsons Promontory, a large piece of land that just out into Bass Strait and probably boasts the highest rainfall of any place in Victoria! The railway from Leongatha to Yarram was close to closure at that time, and I remember seeing a few freight cars sitting in the station. 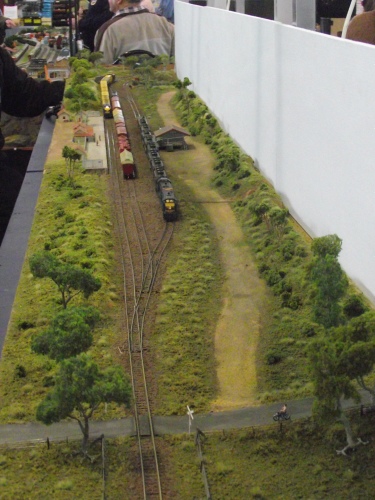 At the 2012 Stawell Exhbition, there was a layout of Fish Creek, and those memories of passing through the area, and other places of interest on the railway came flooding back. Also at the Exhibition was a layout of Orbost. Built in T scale (1:500), it was built to scale. I guess only T scale could truly do that. The approach to Orbost across the Snowy River flats was by a very long and low timber trestle. I remember seeing it when I holidayed in Orbost in the late 1980s. 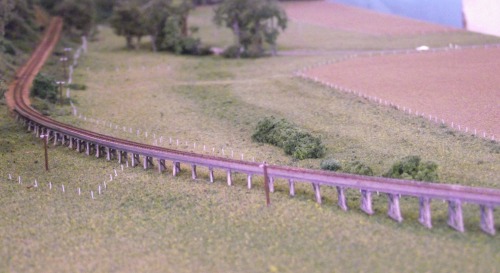 Above: Operational T scale model of the Orbost Trestle Bridge.

But as far as railroad memories go, nothing would beat this: All of my childhood years were spent living in a house that had the narrow guage 2 1/2 foot guage Puffing Billy railway line running past one of the borders of the property. And there were countless times I would sit at the kitchen window as I heard the steam train chuffing up the grade near our house, tying to catch a glimpse of the NA steam loco struggling up the grade with a long passenger train. At the Stawell Exhibition there was a model of one of the NA class locos in On30. Above: NA class narrow guage steam locomotive in On30

All those memories in one place! Stawell, thanks for the memories.