“On the road again, I just cant want to get on the road again…”. So goes a song by a well known Country music artist. And so goes us. We are moving again. But not by choice – the landlord wants to live in the house we are currently renting, so we have been given notice. At least this time we are not moving too far away from where we currently live – about 90kms (55 miles).

And as a result of the impending move, I decided it would be better to have Illinook as a single HO scale 6×1 feet switching / industrial module / layout, and directly connectable to the Dolton module. Also, the Illinook extension built some months ago wasn’t working for me – derailment problems plagued the Team Track area, and it just didn’t feel right. So goodbye Illinook, hello Illinook Mk II.

Above: the new Illinook module.

The new Illinook features an arrival track / spur line, and space for 5 industries allowing for around 10 cars to be in industry spurs and a 4 or 5 cars train to be staged on the arrival track / spur line. It also has a direct connection to the Dolton Industry Park module, and so can act as a staging module for Dolton as well. Like Dolton and the old Illinook, the new Illinook is inglenook-ish, but also has a switchback track to server some of the industries.

Above: Jaxxs Snaxxs and Team Track and foreground, and IHB spur line at the back of the module.

Operationally it will be similar to the Dolton module: it has no run around track, so requires two locos to be able to switch some of the industries. But I have found that this adds to the fun of operating Dolton, and I am sure it will be the same for the new Illinook. All the industries that were featured on the old Illinook are featured or suggested on the new one. And there is space for one or two more industries. One of the new industries is a Coolstore Warehouse. And I might add one or two other industries in as well. The Illinook Asphalt industry will also be better served by the new configuration as it will be right next to the tracks instead of being away from its stone unloading bunker. The plan is to add a bucket crane to the scene to suggest that the hoppers and gondollas are unloaded that way instead of by gravity. 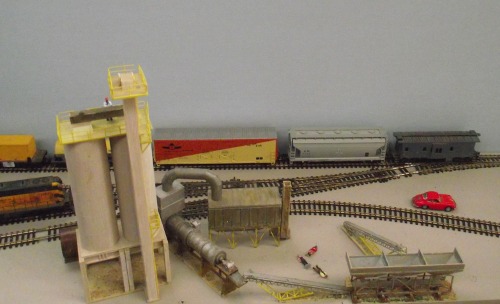 The new Illlinook is now fully operational and, as can be seen from the photos, is partially sceniced.
Illinook is dead, long live Illinook!