On the Anzac Day holiday (Anzac = Australia New Zealand Army Corp and refers to the grouping together of Australian and New Zealand soldiers during the First World War), after attending the Anzac Day ceremony, I was able to explore the Finley Railway Precinct, Tocumwal, and Yarrawonga railway formations, in the Murray River region of New South Wales and Victoria (Australia).

The Finley station area has been restored and is now called the Finley Railway Precinct / Finley Pioneer Railway. At the time this blog entry was created there was a sign near the station which read:

The Finley railway station (1898 – 1987) was the first station built under the economic “Pioneer” system. Tracks were laid without stone ballast, no fences were provided, station platforms were built near the ground level and timber buildings were commonplace. The railway line opened to Finley on 16 September 1898. the small station was built in a period of austerity and remains unique as the shortest terminal station in NSW. While austere, it was a proud symbol. Finley resident Doug Donaldson recals that “…newly married couples would leave … by train … for their honeymoons. Attendants and guests would be present at the Station to farewell the newlyweds”. 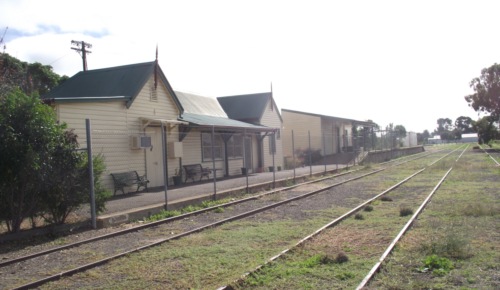 Above: railway station at Finley, NSW.

The railway through Yarrawonga was closed (happens all to often with railways) and then later re-opened (pretty rare!), and the line to Tocumwal currently has an operating container terminal. When I was there exploring there was three locomotives sitting at the platform and quite a long string of flatcars with containers on them sitting in the siding.

Above: Railway bridge across the Mulwala Weir on the Murray River, north of Yarrawonga station. 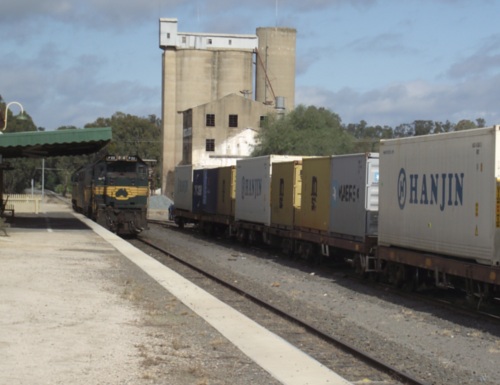 Above: Locos and flat cars at Tocumwal station.

Its always nice to see a railway that still gets used! And its also good to see a community taking interest in its railway heritage.