Stuff happens. Not by itself. But it does happen.

Today being a leisurely Monday in Australia, the scenic treatment for the Petra Aggregate unloader was finished – a gaping hole between the trestle and the pre-existing scenery was filled in so it looks better. 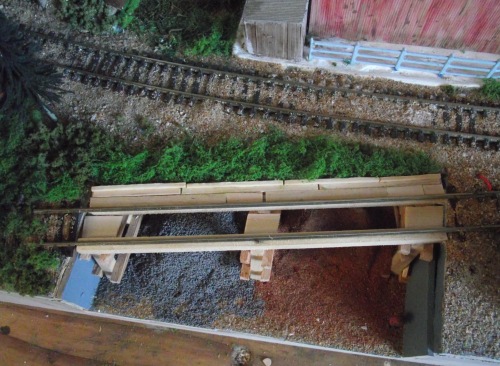 Above: finishing touches to Petra Aggregates.

A Tichy Trains loading crane was ordered through eBay, and I attempted to assemble it. But my fingers were a few sizes too big and even with the 4 eyes I have I couldnt see the smaller bits properly to connect them together. So in the end the crane was modelled as requiring maintenance. 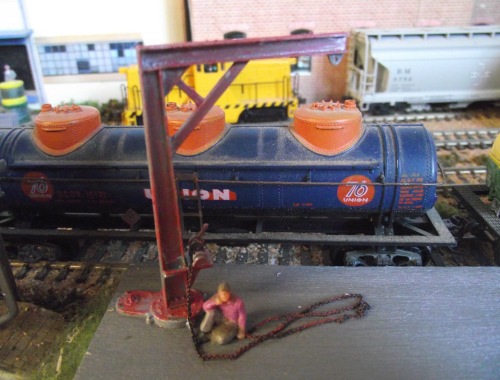 Above: The crane has had a pulley failure and is awaiting repairs.

Yesterday being a leisurely Sunday in Australia, the Dolton Industry Park / Dolton Junction staging was extended an extra 4 feet. The framing and baseboard had been almost ready for quite some time, so the Dolton Industry Park maintenance team swung into action and finished it. There is a possibility that a sector plate or transfer table will be added to the end of the staging at some point in the future. Above: New staging for Dolton.

So what caused me to get so much done? All of this was done to prepare for the first meeting of the Corowa Model Train Group. Thats an interesting story in itself – about a month ago, I decided to advertise in the local newspaper for anyone interested in starting a model train group in the town we live in. There were three responses to the advertisement, and so last week we met at the local McDonalds and discussed trains in general and how to operate the group. So we decided to have two meetings a month. And the first one is at our house this Thursday night.