The story for Al’s model railroad is ‘contrived’ (his word, not mine).  He set his model railroad in the time just after the birth of Conrail, when many US railroads were collapsing. That allowed him to use all those names to populate his railroad.  The section of New York State was in the midst of these interconnecting lines.  The Southern Tier of the state is the long straight border between New York and Pennsylvania.  He imagineers that the railroad connects the small cities of Binghamton and Elmira.  His wife grew up In Elmira, but there is no more connection to the town than that. 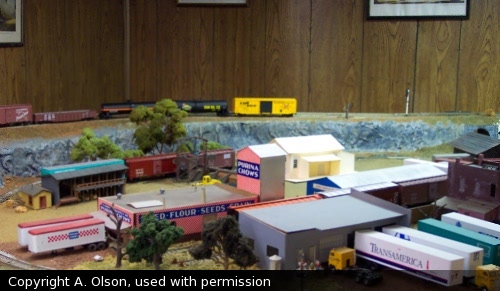 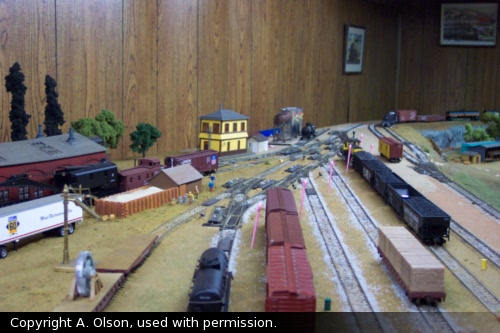 The track plan is a modified dog bone, that allows him to have a decent run for a mainline.  The layout has 16 industries on sidings that give a lot of switching of freight cars.  He spent time devising forms in Microsoft Excel on his computer and then printing the forms out, which enhances operation as his layout is a one man operation, and has no operating sessions except by himself.

An Australian ( who calls himself TrainBrain ) invented a car selector software that he uses to generate train lists.  This is somewhat useful, although Al states that it repeats the same cars too often for his needs.

The railroad, called the Southern Tier Railroad, has a slight grade separation of track.  The yard is higher than most of the industries, and there is a hidden two-track loop that he no longer uses because the track have corroded and he can’t get access to clean it. 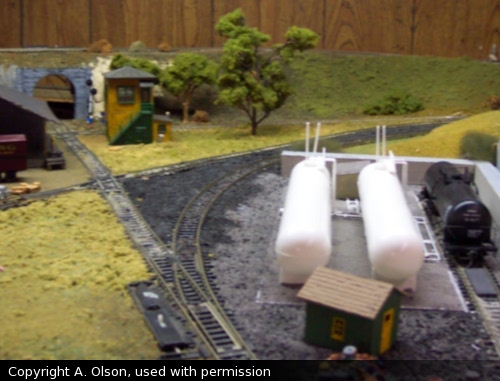 Above: Picture showing the grade separation, and a tunnel leading left to a long loop and also right the switch to the abandoned underground.

Although he would like DCC, his wiring ‘is pre-historic’, and he can’t imagine making that stuff work.  (Usually when his 6 year old grandson comes and wants to watch the trains, something goes wrong, and he is embarrassed.)  When he runs it by himself, all is well. Man, that sounds familiar! That’s Murphy’s law, I believe.