Over the last few years I have spent a lot of time cycling. Around 6 years ago I was commuting to work on the bicycle, cycling around 100km a week. After a number of moves, and the work situation changing from office based to home based, I no longer cycle to work. But I still spend a number of hours a week on the bike and find it therapeutic and really good exersize! I have gained a new appreciation for old railway formations as a result as there are 2 well developed rail trails (old railway formation converted to cycling / walking track) in the region where I live: Murray to Mountains, and High Country trails. These two trails provide more than 120km of off-road, railway formation based trails which not only provide good venues for cyclists but are interesting for the rail enthusiast (and I happen to be both). Over the last few years I have taken a number of cycling holidays which have included a number of rail-trails in their itineraries.

Over the last month or so I have been part of a team putting together a proposal for converting the railway closest to my home into a rail-trail – the Culcairn – Corowa railway (you can find more information about the railway in the Prototype Info – Corowa Railway page.

Yesterday I decided to explore some of the old railway formations between Walla Walla and Culcairn – that section of railway is the closest disused railway formations to home and it seemed a bit strange that I hadnt explored them properly yet. So I set off on the bike in fairly cool (but beautifully sunny) weather and incorporated roads that included railway crossings and access to railway formations along it.

Following is some photos of what I saw, in order from Culcairn heading towards Walla Walla. 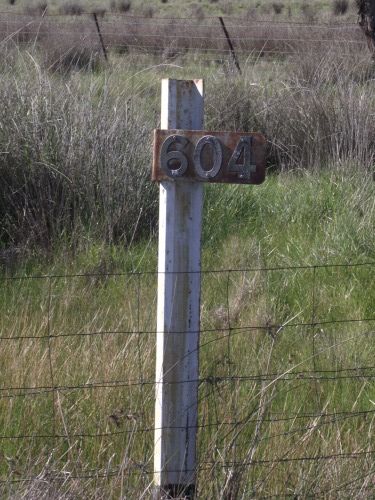 Weeamera platform was located at 604.170 km, near the Weeamera road crossing. The track itself, apart from being really rusty, looks in very good condition although whether it is stable enough for a train could be an entirely different matter! Of all the track formation that is out of time this section seems to be in better condition than most of the rest of it with the ballast still very easy to see and no trees growing in between the sleepers. I guess if it is turned into a rail-trail it will make not difference what condition it is in as most of the time the track is ripped out before the trail is put in anyway. The platform itself is not that easy to discern, but I reckon I found
what was left of it – the mound remains are in pretty much the correct
position. 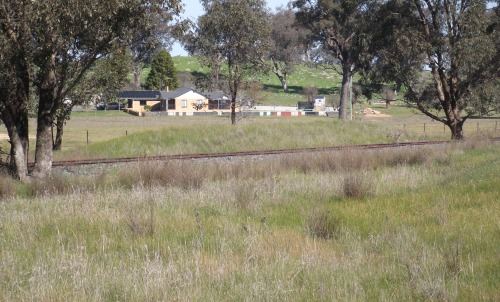 Above: The remains of the Weeamera platform (I think)

Between Weeamera and Benambra Road there was another platform called Hurricane Hill, but as it is surrounded a private land and a considerable sized quarry I was not able to get into that location. The next few photos are of the area around the Benambra Road crossing. 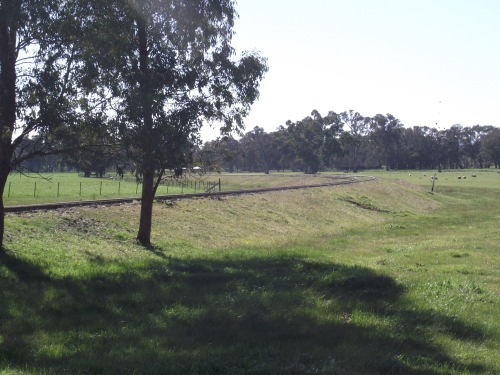 Above: A drainage culvert between Benambra Road crossing and Walla Walla.

Since January 2014 I have ridden along roads that have crossed over the railway between Walla Walla and Corowa, but have not explored some of the more obscure locations along the old railway line. The Weeamera – Benambra Rd crossing section was quite interesting to explore, and I am looking forward to exploring some of the more obscure places along the railway right-of-way in coming months.