Since the last blog post, which was quite some time ago, I have been enjoying operating Dolton – Illinook – Blue Island and re-designing the virtual interchange application that me and some other modellers use to interchange traffic between each others model railroads.

About a week ago my youngest daughter needed some extra track for her layout, and I used the opportunity to also purchase some new inhabitants for the HO scale Dolton-Illinook-Blue Island industrial / switching layout. I wanted the figures I purchased to be different to the ones I already had, and to create4 scenic interest and variety. So this is what was purchased: A paramedics set, and a workmen set. And they were placed on the Blue Island and Dolton modules. 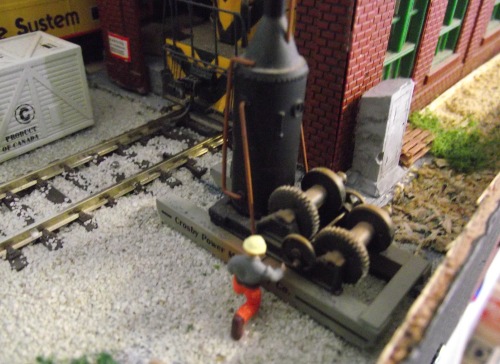 Above: “I think it needs a new Canuter Valve! That ought to give it MORE POWER!” (I dont think so, Tim).
Below: Workman taking out the garbage. Well, one of them is anyway! 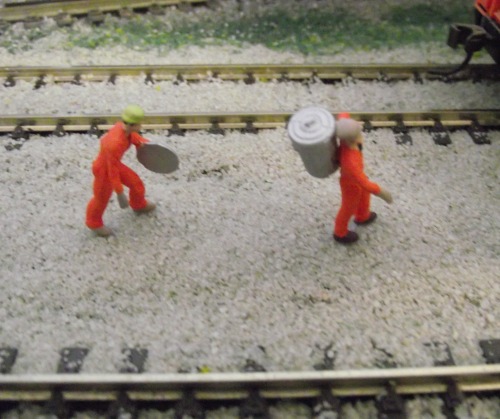 Above: Workman making repairs to the Dolton yard Office. That guy trying to get out of the vent is going to have a very sore back!
Below: An accident at Petra Aggregates. Exactly how two people were injured is still being investigated, but it seems that the height of the trestle and the lack or adequate fencing could be contributing factors. The manager, to the right with arms cropssed, is being very tight lipped about the incident. The population of the layout increased by about 50% with the addition of the new figures.

It’s been a while since the last blog post, but that does not mean there have been no layout improvements. After spending quite a bit of time on improvements to my various other micro layouts Read more…

Since I built the HO scale Box Street micro industrial switching layout, I have had a number of structures at the front of the layout, between the track and the front edge of the layout. Read more…

Layout in a Boxfile

Anyone who has explored the late Carl Arendt’s micro layouts themed website will probably have happened upon a page or small layout scrapbook featuring layouts in boxes of various sizes, as small as a pencil Read more…